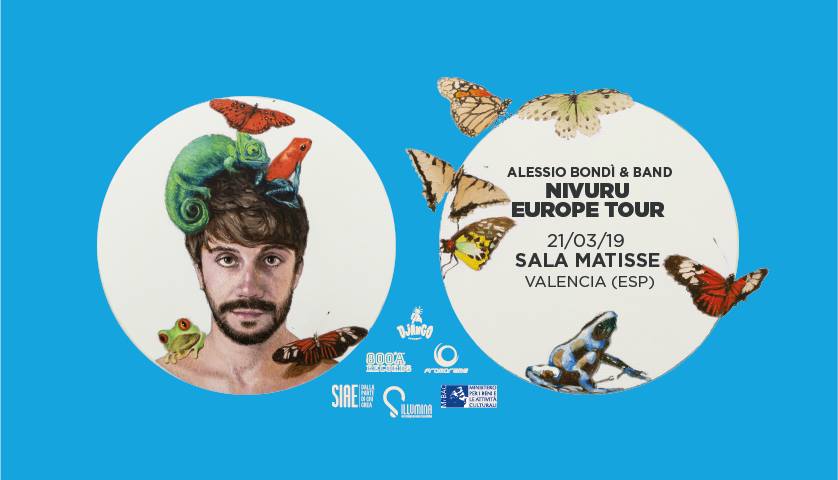 Alessio Bondì returns to Valencia, accompanied by his band for the first time, to release his new album “Nivuru”.

“Nivuru” is the title of the second album by Alessio Bondì, produced by Fabio Rizzo, published on November 2, 2018 by 800A Records.
In Sicilian lingua, “Nivuru” means “Black” and it is the fruit of the experience and listening sedimented from his first work “Sfardo”.
Nivuru is a luminous album, a basket of ripe fruit, a triumph of shadows and colors. Black has always had an ambivalent meaning, of elegance and mourning, prosperity or abyss but, scientifically, it manifests why it does not reject any light: it absorbs them all without giving off any color.
The tracklist is the description of a journey into the freshness and sensuality of Sicily, the homeland of the Palermo artist, between animated rhythms and sudden suspensions.
“I feel Sicilian boiling in the sweat caused by contact with the other, in the inclusion of death in sex, in the sense of party and guilt, in a sweet and violent illusion” – comments Bondì.
From Afro-funk to Brazilian music, the sound of “Nivuru” is, today, articulated like never before, rich in percussion and surprising arrangements, without taking space away from those moments when Bondì’s guitar and soft voice take the stage.

All nine tracks of the album could be considered as songs d’amor, a kind of phenomenology of a couple: from the courtship (“Dammi Una Vasata”), the fantasy of flying over the sea to nullify the distances of the beloved ( “Amuri Miu Pi Tia”); from the promises of love with an old flavor to say “I love you” (“Puddicinu to Luna”), to the complex relationship between father and son, inspired by the true story of a palermitano pilot of formula 1 (“Un Favuri”) or the disastrous relationship between a vojeur and his desired wife (“Savutu”); from the tsunami that causes the end of a story (“Si Fussi Fimmina”) to the consequent isolation (“Cafè”).
At first listen, “Nivuru” could appear as characterized by a festive atmosphere but, once again in depth, the texts reveal their visceral pulsations, sensuality, carnality and a silent spirituality: all the pieces are dressed in darkness, in the sweetness and disappointment, in the rhythm and the crown.

The last years of Alessio Bondì have been characterized by a succession of trips, listening, dialogues with other languages ​​and cultures, sounds, reflections and epiphanies. This album is the condensate and the consequent rain of all this.

(Tour made with the support of MiBAC and SIAE under the initiative “Sillumina, copy privata per i giovani, per la cultura”.)