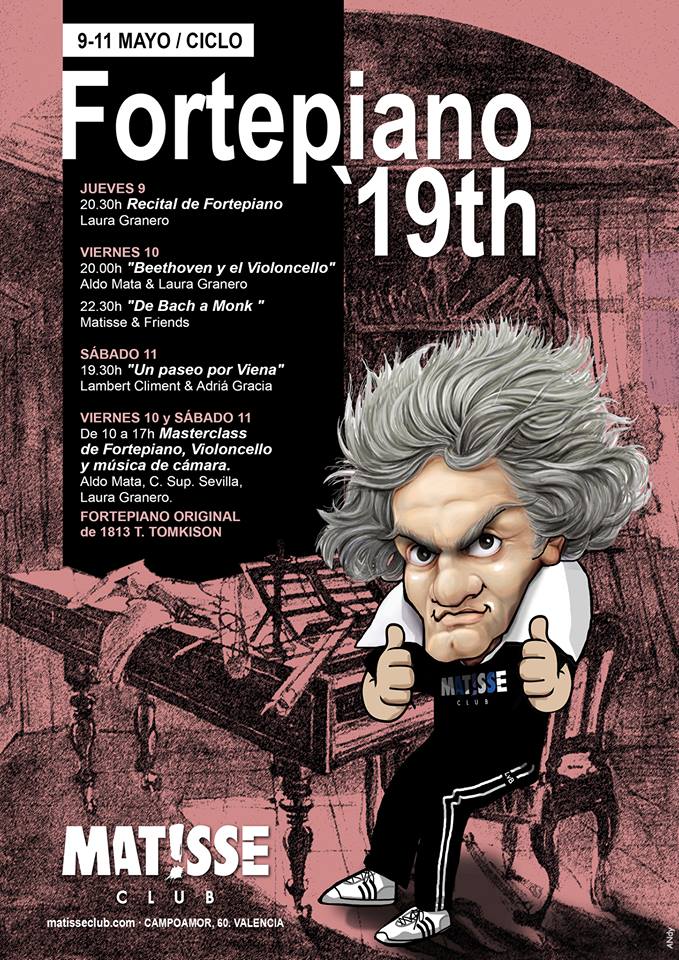 *PROMO: If you purchase tickets for any of the 3 recitals of this fortepiano cicle, you will get a free ticket for The Bach a Monk on 11/05.

This program proposes to rediscover some of the works that the composer of Bonn wrote, through the listening of this repertoire using an English fortepiano of 1813 (the appreciation that Beethoven professed by the English fortepianos was well known) and a violoncello with a ‘set -up ‘historically appropriate (gut strings, no pica, classic bow). However, a historically informed interpretation is not exclusively about the use of period instruments or replicas, but above all a reading “between the lines” of the score, which reincorporates interpretative resources that have been falling into disuse (in the case of violoncello: the use of vocal resources such as “portamento” or vibrato as an ornament and not as a basis for the production of sound, in the case of fortepiano, arpeggiata or “non-psychicity” between hands to highlight the melody, use of the pedals only at particular times). Spontaneity, ornamentation and improvisation were especially cultivated in the 18th and 19th centuries and will play an important role in this concert.
Beethoven after contacting various cellists (the Duport brothers, Kraft, Romberg, etc) decided to write several works for cello, among which the five sonatas for fortepiano and violoncello stand out, his Seven Variations on the aria “Bei Mannern”, his Variations opus 66, on the aria “Ein Mädchen oder Weibchen”, (both of “The Magic Flute” by Mozart), and its Twelve Variations on the theme of “See the hero conqueror” of Judas Macabeo de Handel, as well as the Triple concert for fortepiano, violin and violoncello.

The Opus 5 sonatas emerged in 1796 from Beethoven’s stay in Berlin and from meeting the King of Prussia, Frederick William II, music lover and cellist. Although Jean-Pierre Duport was the king’s cello teacher, Beethoven premiered them with his brother Jean-Louis Duport. They were published as “Two great sonatas for fortepiano with violoncello obbligato”.
Between the years 1795 anD 1800,

Beethoven showed special affection for the genre of variations. In addition to the aforementioned works, written for violoncello and piano, nine works of this genre for piano work in this period, among which are his famous Variations on the theme “Se vuol baIlare”, from Las Bodas de Fígaro, by Mozart ; the Variations on a theme of the Count of Waldstein, for piano to four hands; and the Variations on a theme by Mozart, for two oboes and as English. The Seven Variations in E flat major WoO 46 “Bei Männern, welche Liebe fühlen” was composed in 1801 and combines moments of enormous cantabile and delicacy – as in the theme itself – with moments of bravery and virtuosity.

The sonata Op. 69 in La Mayor was composed in 1808, the same year in which his Fifth Symphony ended. It is dedicated to the amateur cellist Ignaz von Gleichenstein. According to Julius Schneller, in the copy of the dedicatory Beethoven he wrote “Inter Lacrimas et Luctum”. Probably, it alludes to the French occupation of Vienna. It is undoubtedly one of the masterpieces of the genre.

BIOS:
Aldo Mata, cello. Spanish cello performer, he has offered solo concerts in Europe, Asia and America. He has won prizes in several competitions (JJMM, Searle, Popper, etc.) and scholarships (Fulbright, AIE …). He is a PhD from the University of Indiana and Professor at the Superior Conservatory of Castilla y León, OSCYL and at CSKG. Member of the Alborada Trio and the Granados Quartet. He has recorded as a soloist for Naxos and Sony and with Tempo di Basso. Among his upcoming commitments are concerts in Japan, Spain, Brazil, Switzerland, USA and Romania, as well as the recording of a CD in Michigan.

Laura Granero, fortepiano. Born in Madrid in 1991, Laura Granero is a young fortepianist, pianist and harpsichordist specialized in the repertoire of the 18th and 19th centuries. In addition to his great interest in written sources and historical interpretation, his passion for the study of recordings prior to the second half of the 20th century should be noted. He has offered solo recitals and chamber music at venues in Spain and Europe and Australia, including at some of the most important festivals in Europe, such as the Santander Festival, Oude Muziek Utrecht Festival (Fabulous Fringe), Royaumont Festival or the Musical Fortnight of San Sebastian and in emblematic venues such as the Chamber Room of the National Auditorium in Madrid, the Grote Zaal of the Tivoli Vredenburgh in Utrecht or the Salle Cortot in Paris. He plays regularly with La Guirlande, as well as with the singer Jeanne-Marie Lelièvre, the fortepianist Sebastian Bausch and the cellist Aldo Mata.