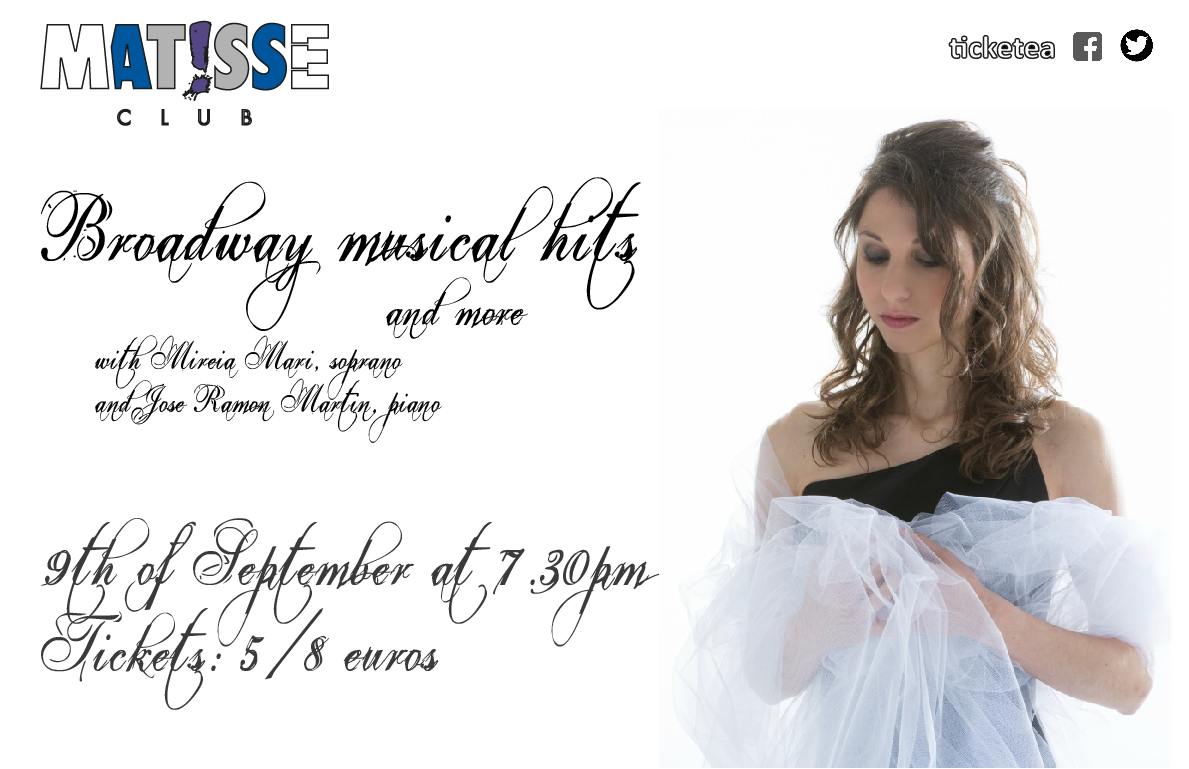 Broadway hits of all time is a recital prepared by the soprano Mireia Marí with the purpose to bring American music of the 20th century to our public. For this reason, several musical pieces from musicals, films, operettas and Amercian operas from famous composers have been selected like George Gershwin, Leonard Bernstein y Harold Arlen, among other. Each piece is introduced in a enjoyable way by the soprano, who has prepare several surprises and humorous moments to offer an intense show.

Well known movie soundtracks like An American in Paris, The Wizzard of Oz or The Sound of Music will be heard in this recital, as well as musicals like West Side Story, Peter Pan or Porgy and Bess. Without leaving aside jazz standards like S’wonderful, I got rhythm o Summertime.

Music that will take us to dancing, a dream world, improvisation, with a direct and lively language. Always with the American gracious, ingenious and happy way.

Born in Valencia, studied piano and singing at the Conservatorio Superior de Música Joaquín Rodrigo. Graduated in Psychopedagogy by the University of Valencia. She has refined his vocal technique with the sopranos Mariella Devia, Katerina Tretyakova, Maite Alberola and Lorena Valero, and has studied vocal repertoire with Ricardo Estrada, Vicente D. Martín, Elizabete Sirante, Carles Budó and Husan Park. She has worked with the following directors: Umberto Finazzi, Angelo Guaragna, Alice Meregaglia, Ramón Ramírez, Aldo tarabella, Laura Cosso, Antonio Díaz Zamora and Amparo Urieta. Marí has been a finalist in the Concurso Mirna Lacambra in Sabadell dedicated to the opera “Romeo et Juliette”. She has performed the following opera roles: Berta and Rosina in “The Barber of Seville” of Rossini at the Cosenza, Scalea and Cirella (Italia) theatres, Clarina in “La cambiale di matrimonio” of Rossini at the Teatro San Materno Ascona and the Lugano Auditorium (Suiza), Musetta in“La Bohème” of Puccini in San Nicola Arcella (Italia), Euridice in “Orfeo ed Eurídice” of C.W. Gluck, and Maria in “West side story” by Bernstein. She has carried out numerous zarzuela concerts, oratories, operas and songs in the University of Valencia, the Botanic Garden of Valencia, Auditorium of Castellon, Cathedral of Valencia, Quartell Auditorium, Palau de la Senyoria d’Alfara del Patriarca, Teatre Agrícola of Alboraia, Castell de Vilanova i la Geltrú (Barcelona), and culture centres of Altea, Alginet, Utiel, etc.

He initiated his piano and violin studies at the age of 8 in the Escolanía of Valencia. Subsequently studying piano with Ricardo Roca and Mario Monreal. He assisted to masterclasses with Guillermo González, Rita Wagner, Wolfram Rieger and Miguel Zanetti. He has won the “Maestro Serrano” competition 5 times, 1st place in the “Ciudad de la Línea” National Contest and 1st prize “Concurso Internacional José Roca”. In 2007, José Ramón was selected by the “Centre de Perfeccionamiento Plácido Domingo” where he specialiced as repertorists working with A. Zedda, A. Zabala, K. Sallman, R. Vignoles o G. Fabbrini, among others; and trained as musical director with J.M. Pérez Sierra. Since then, he has been working as pianist repertorist and director assistant at the “Palau de les Arts Reina Sofía” where he has been working with masters like Maazel, Mehta, Domingo, Chailly, Prêtre, Abbado, Biondi, Luisotti, Wellber, Dantone, etc. He participates with the Orquesta de la C. Valenciana addressing the symphonic repertoire with the piano and, occasionally, as harpsichord or fortepiano player and debuted as musical director in 2016 with the Mozzart “Idomeneo” at the Palau de les Arts, receiving excellent reviews. In 2017, “El Carnaval de los animales” at the Martín y Soler venue.