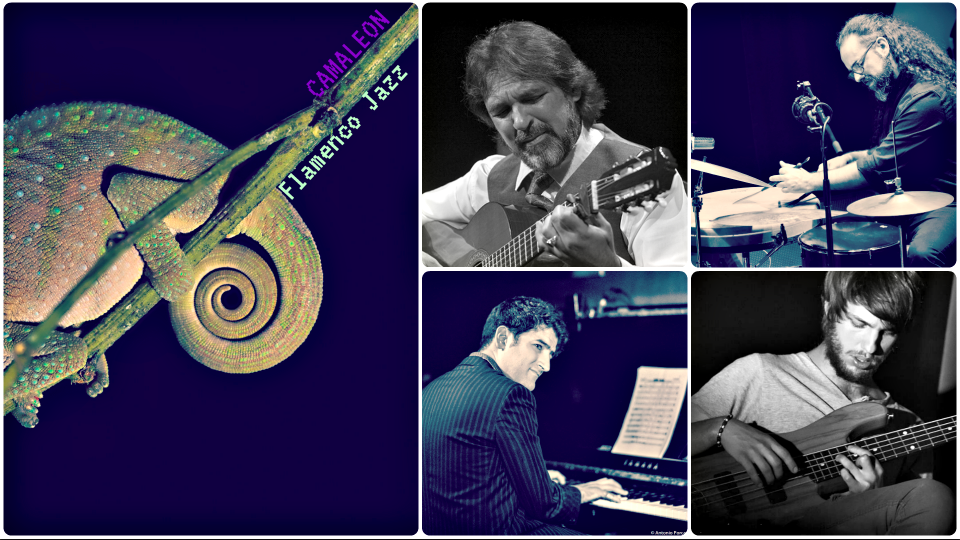 Camaleón (chameleon in English) was a Flamenco Jazz project created by master drummer Jose Antonio Galicia in the early 90’s, and that continued until 2013, year when “el Gali” sadly passed away. He was not only a pioneer in this genre, but also a very generous mentor, who shared his wisdom with the new generations back then, inspiring us now to rescue this project, after being in the original Camaleón back in the 90’s.

In Valencia 2018, we found the perfect ingredients to put it together again and honor el Gali through continuing, respectfully, his legacy.

Two of the members of the band belong to that generation in Flamenco and collaborated in the original Camaleón back in the 90’s.

Valencian pianist Albert Sanz, is a reference in the European Jazz scene and his compositions, improvisations and musical taste bring this band to a higher level.

Some of his collaborations include Kurt Rosenwinkel, Al Foster, Antonio Serrano and Chris Cheek among others.

On bass, a young promise of the Spanish bass, virtuoso, versatile and excellent improviser and composer, Miquel Alvarez, who has accompanied Jazz figures like Perico Sambeat.
On Flamenco voice and dance, contributing to the changing spirit of this project, Camaleón will count with the best local singers and the most talented dancers on a weekly basis.
Camaleón is changing and its colors move from the most traditional Flamenco to contemporary Jazz, full of improvisation and passion.

The premiere of the new Camaleón will be on June 3rd, an unforgettable night that you don’t want to miss, that will be followed by a Jam session in the style open to the attendants who’d like to participate.