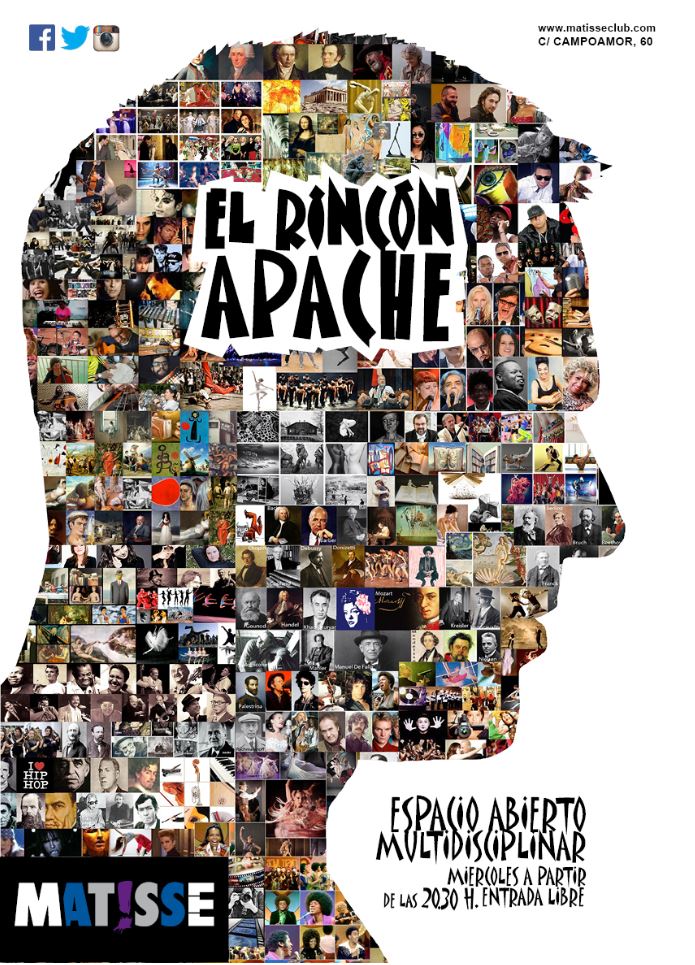 The Apaches or Apache Society was a group of French musicians, writers and artists, formed around 1900. Among its members were Manuel de Falla, composer, Tristan Klingsor, poet, painter and art theorist, Maurice Ravel, composer, pianist and conductor, Paul Sordes, painter or Igor Stravinsky, composer and pianist.

He was named after the group after accidentally crossing with a newspaper vendor who exclaimed “Attention les apaches!”. Soon they adapted the name, which in French meant vandal, because

Every Wednesday night we want to pay homage to this group of artists who, just over a century ago, embodied the most revolutionary and bohemian spirit in the history of music. To this end, Matisse Club presents: “el Rincon Apache”, an open space of a multidisciplinary nature to which all artists are invited to participate. Musicians, painters, poets, writers, dancers … it does not matter what art domines, on Wednesdays night Matisse Club is your place.

The space will feature pianists José Jaime Hidalgo de la Torre and Jose Ramón Martín to start the show and organize the proposals every week, we are sure that they will surprise you! To give a greater wealth and dynamism to the show, every Wednesday we will have a luxury guest to accompany us during most of the night, so we always guarantee new proposals and many surprises.

For the most timid artists we have prepared an offer that will make you jump to the stage to transmit all those emotions that our beloved public deserves … ALL WEDNESDAYS IN MATISSE CLUB 50% DISCOUNT on drinks for the artists that collaborate in the Apache Corner and the Schubertiada.