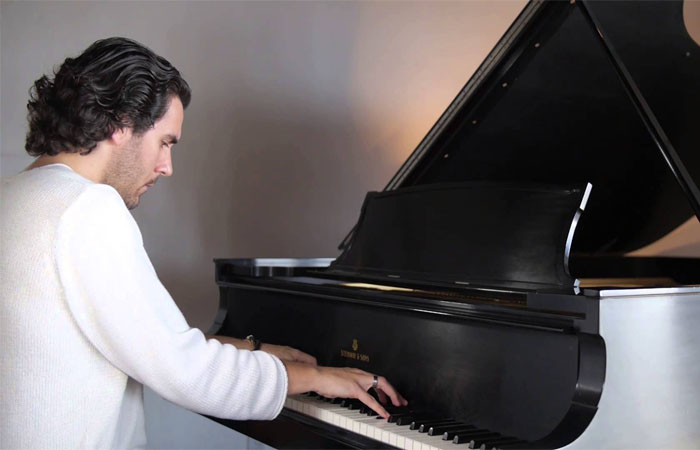 The show is based on original works for flamenco piano by Alex Conde (bulerías, alegrías, soleá, fandangos, seguiriya). The works are performed with the support of electronic keyboards, loop pedals, percussion and flamenco palmas, tools with which the process of rhythmic creation is performed live.

In most cases, the concerts I perform are under group formations with piano interludes. With the experience in the stages, I have developed a flamenco piano repertoire and its clubs as a base. The language and guitar techniques such as rasgueado, picado and alzapúa applied on the keyboard, which differentiates this repertoire from others by its originality and feeling.

The addition of keyboards, palms, drawer and loop pedals presents the project to the audience in an open manner, developing the creative process live and interpreting a pianissimo virtuoso, full of jazzy colors and improvisations, textures, syncopated rhythms, electro-acoustic sounds like that of the bass “Moog” or the “Fender Rhodes”.
****

The pianist, composer, producer, teacher and arranger Valenciano, resident in New York, Alex Conde, has toured the most prestigious stages of the US with his musical proposals. The BeantownJazz Festival in Boston, Blue Note of NY, San Jose Jazz Festival in California, PDX Jazz Festival in Portland Oregon or the San Francisco Botanical Gardens are just some of the stages he has covered with his fusion of flamenco piano and jazz. In turn, Alex assiduously collaborates with flamenco companies such as the San Francisco Flamenco Theater (where he received a nomination for the Isadora Duncan Awards in the sound and text category), Aspen Santa Fe Ballet and Diego el Cigala among others.

In the field of jazz, Alex Conde has collaborated with artists such as Marcus Gilmore, Eddie Palmieri, Jamey Haddad (Paul Simons) or Conrad Herwig with the project “The Latin Side of HerbieHancock” at the Russian jazz festival in Summer of 2018, project which received in 2010 a Grammy Award nomination in the category of best album of Latin Jazz.