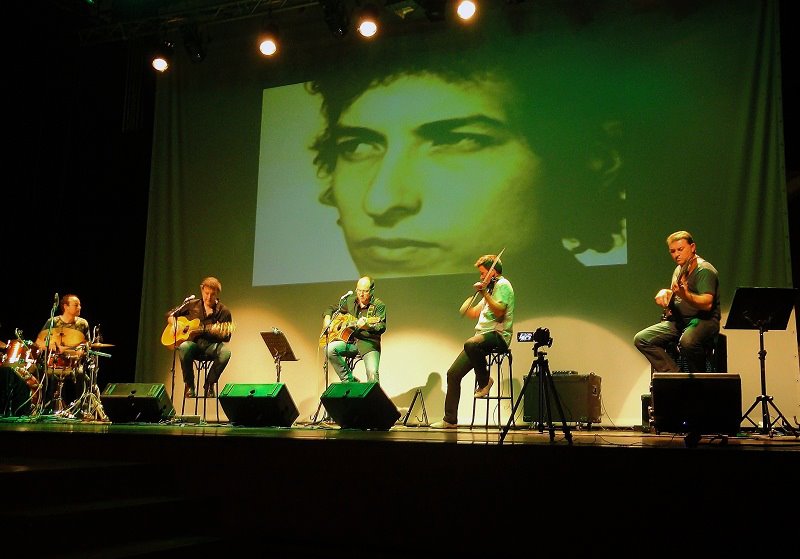 TARÁNTULA is a quintet of acoustic formation that offers us a tour of Dylaniana discography: from the early themes of the Minessota poet in the early 60’s to the covers of Dylan songs recorded in the last decade.
DYLANOLGY aims to be a reminder, a flash back in the Dylan universe that leaves us brushstrokes of lyrics and songs, with guitar riffs well achieved, free and adorned mostly, by a violin that enhances the melodies that have accompanied us throughout the life, becoming more than one occasion in true banners of vindication, freedom and on more than one occasion love songs.
Blowind in the wind, Romance in Durango, Sara, Hurricane, etc. are the themes that Tarantula proposes in a close and sincere scenario, in which you can listen 40 years later than, The time they are a Changin.

Trajectory:
After a successful stage with the Opera Prima group, several of its components, Ricardo, Fernando and Jose, decided to continue their musical concerns. They formed The Farm of Maggie, with the new band to interpret the most representative hits of Rock.
In the midst of his performances, Bob Dylan’s themes were highlighted, which were the most acclaimed by the public, who was surprised to hear live songs like Hurricane or Like a Rollings Stone, and after joining Damian and David, TARANTULA was born.
Since then, 2007, in acoustic or band format, Tarantula based his music exclusively on the work of Bob Dylan, performing in Festivals, halls and houses of culture, on numerous occasions, around our geography.